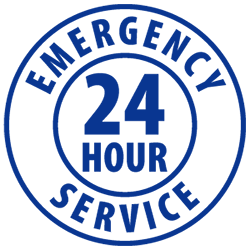 Our founder, Arthur W. Crooks was born in 1885 in Goshen, Indiana and moved to Sturgis, Michigan as a small boy. Since he was valedictorian of his graduating class he was offered a scholarship to Hillsdale College, but could not attend due to financial problems. He taught school in Colon, Michigan and in 1907 moved to Battle Creek to begin the trade of plumbing.

In 1909 he became plumbing inspector for the City of Battle Creek, but returned to plumbing in 1911 by working for Hanchett Plumbing, which he eventually purchased in 1912. At that time his wage was 12-1/2 cents per hour.

Arthur’s children Helen, Walt and Warren all worked in the plumbing business. Helen and Warren continued running the business from the middle 1950’s until March of 1980. It is now owned and operated by Arthur’s grandson, Arthur W. Crooks II.

We have all the skills, knowledge, and experience needed to handle any type of plumbing and heating project. We have learned that being big doesn't always translate to being good but being good certainly translates to being respected, known, and busy!

Emergency? We are waiting!